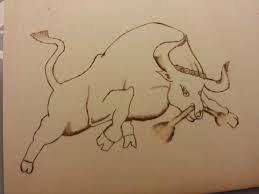 THE RED BULL AND THE DRAGON

The symbol of Turin is the bull. You can understand it from the name, from the fountains called “Toret”, from the bull on the flag and in Piazza San Carlo as a lucky door.

The legend behind it is that. Near the river Padus (the Po) there was a huge dragon spitting fire that dominated the small village. Since man could not fight the supernatural being, the habitants relied on a red-haired bull, a powerful, strong and brave animal. However, since the bull was an earthly animal, to allow him to fight, they made him drink lot of good wine; so the proud and drunken bull succeeded in corning the dragon and killing him, but sacrificing his life.

People, now free and grateful, dedicated their city to their new God, the “bull”.

Why do the Turin people really like this legend? Because we consider ourselves strong, courageous and ready for sacrifice! Are we? Come and know us!!!